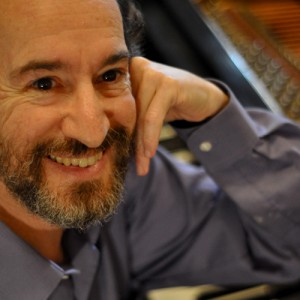 Keyboardist and composer Richard Shulman creates music intended to be a positive influence for himself, audiences and society.

Richard has recorded 28 of his own albums as well as more than two dozen other recordings for which he has provided compositions, performances and/or musical production. Trained in the classical and jazz fields, he has developed a heartfelt language in these genres while focussing a significant amount of his output on music for meditation, healing and inspiration. He currently divides his concert schedule between performances of his meditation music and his original jazz as personified by The Richard Shulman Group  and The Richard Shulman Trio,

Shulman has performed at the Weill Recital Hall at Carnegie Hall, Art Park, the United Nations, the Kool Jazz Festival, The Amenia Peace Festival and a wide variety of other venues throughout North America and in Europe.

As a composer, Shulman has created over eighty pieces pieces for small jazz groups as well as songs and pieces for chamber ensembles, choir, and symphony orchestra. In 1986 and 1987 he composed music for orchestra and jazz quartet during residencies at the Virginia Center for the Creative Arts. From 1986 through 1995, Shulman was the principal composer for “Theatre of the Heart,” a cooperative of dancers, singers, and musicians dedicated to fostering community and the environment. Commissions include a piece for the Amherst Saxophone Quartet, and “May Peace Prevail on Earth” for singers, symphony orchestra, three choirs, and jazz quartet, created for the World Peace Prayer Society. In addition, he has created hundreds of ‘Musical Soul Portrait‘ recordings for individuals, couples, and groups.

Born and raised in Niagara Falls, New York, he began piano lessons at age seven. As a teenager Richard played organ at various churches, was the music counselor at a summer camp in Canada, and joined a rock band with future jazz recording artists Thom Rotella and Bobby Previte. Shulman graduated from the University of Rochester with a double-major Bachelor’s degree in music (piano performance) and psychology while continuing to perform with drummer Previte and bassist Bill Savino in the jazz-fusion band Thermopylae.

While at Rochester, Shulman also attended the prestigious Eastman School of Music and studied jazz improvisation with Chuck Mangione and Marian McPartland, orchestration with Donald Hunsberger and arranging with the legendary Rayburn Wright. Shulman continued his studies in jazz with Frank Foster, composition with William Kothe and Lejaren Hiller, and piano with Yvar Mikashoff while getting his Masters Degree in musical composition at the State University of New York at Buffalo. During those years he played onstage in concert with such jazz stalwarts as Thad Jones, Eddie Gomez, Pepper Adams, Jerry Dodgion, Freddie Hubbard and Al Harewood, and recorded his first jazz album, Wonder.

After moving to New York City, Shulman played in the studio as a session musician with the great jazz rhythm section of Ron Carter and Grady Tate; performed with groups such as The Richard Reiter Swing Band, Providence and Crossing Point; and recorded and performed with the acts Mr. Spats (Steve Evans, June Bisantz, Steve Swallow and Bob Moses) and Bobby Previte (Lenny Pickett, Tom Varner & Dave Hofstra). The Richard Shulman Group, a jazz quartet, played regularly in the New York area and recorded the albums A Simple Gift and Open Spaces, and Richard also released the solo jazz piano album Solo Flight.

In New York City, he found himself on a spiritual search which lead him to meditation classes taught by Hilda Charlton. While continuing his jazz performances, Shulman began playing for the meditation and healing groups which he attended. His first recording incorporating some of this meditative style was the extemporaneous solo piano album, World Peace, recorded on the 40th anniversary of the bombing of Hiroshima. This album had been suggested by healer Ron Young who also showed him that he could create music for individuals for healing and alignment. These recordings became known as “Musical Soul Portraits” and have been a feature of Shulman’s solo concerts ever since. This work led him into creating more albums for healing and meditation, including A Higher Dimension, Light Music, Music for Magnified Healing, First Rites and Sacred Music for Healing Hands Volumes 1 & 2.

Shulman’s first two album releases with national marketing were Light from Assisi and Transformation at Assisi, inspired by spiritual pilgrimages to the town of Assisi in Italy where St. Francis was born. Richard then began groundwork for the 2002 project Camelot Reawakened: A Vision Fulfilled with a pair of recordings — Ascension Harmonics and the partially-orchestral Keeper of the Holy Grail — with spiritual attunements by Samuel Welsh. “Our research for ‘Holy Grail’ led me to the larger picture of Camelot,” says Shulman, who also took a trip to Glastonbury, England in 1995 to study the area. “I feel that the energies of Camelot still reside in places like the Abbey there and the Michael Tor, the sacred hill which is pictured on the cover of Camelot Reawakened.”

From 1996 through 2005 Richard focussed on the creation of the CD and DVD/video Camelot Reawakened: A Vision Fulfilled. Inspired by an inner vision, this project follows the manifestation of “Dreams of the Heart” in music and words. The CD and DVD feature a 35- piece orchestra consisting of members of the Asheville Symphony Orchestra, a choir, soloists, and Shulman at the piano. The concert and recording session were conducted by Robert Hart Baker.

Related albums recorded during this time include First Rites and Music to Walk the Labyrinth. The Camelot Reawakened CD won a 2003 Coalition of Visionary Resources (COVR) Visionary Award, and the DVD was a finalist in the 2006 awards. The DVD has also won an Award of Excellence and an honorable mention in the 2007 Accolade Competition.

In 2003, RichHeart Music released Shulman’s duo album with cellist Adriana Contino, who for several years was the principal soloist for the Stuttgart, (Germany) Chamber Orchestra. New Beginnings explores the delicate balance between inner and outer listening in free flowing improvisations as well as upbeat and lyrical compositions. Shulman’s solo piano CD, Music of Peace was released in June, 2006 and is music dedicated to and expressing inner peace. His 2008 release, 11:11 Piano Meditations for Awakening, is a series of tranquil improvisations exploring “Wake up calls from Spirit.” The 11:11 CD won a 2009 Coalition of Visionary Resources (COVR) Visionary Award for best CD in the meditational/healing music category. 2009 brought the release of Sky Jazz, Shulman’s first Jazz CD in many years, as well as the re-release on CD of “A Higher Dimension,” a meditative solo piano album expressing qualities of spiritual realms.

In 2007, a concert with bassist Mike Holstein and drummer Sonny Thornton gave Shulman the realization that this trio had the potential to be a vehicle for original trio music. The Richard Shulman Trio aka Earth & Sky released  Sky Jazz in 2009.  A Youtube playlist of the trio is available here.

In 2013, Shulman returned to and enhanced his own musical stream of healing and Divine Alignment with the production of a new album entitled “Bliss of Being.” Although he had created eight albums of music for healing previously, these were all solo recordings, and “Bliss of Being” is his first ensemble recording with an intent of music for healing and divine connection. Shulman plays mostly piano on “The Bliss of Being” and a little synthesizer, and is joined by Adriana Contino – cello, Dielle Ciesco – vocals, Kate Steinbeck – flutes, and Bob Hinkle – crystal bowls to form The Pure Heart Ensemble. Bliss of Being was nominated for a Zone Music Reporter award in the “Best New Artist” category, tracked at #11 for two months on the ZMR chart and was #1 on Music Direct’s “Soundscapes” twice and in their top 20 for over a year.

Shulman has played “warm up” sets for Grammy winning saxophonist and composer Paul Winter as Part of UNC-Asheville’s “Ecomusicology” conference and for National Endowment for the Arts Heritage Fellow, Sheila Kay Adams as part of the concert “Appalachian Holiday” with National Hammered Dulcimer 2003 Champion, Joshua Messick, both performances at the Isis Restaurant and Music Hall.

Shulman currently is an adjunct instructor of jazz piano at the University of North Carolina – Asheville and is music director at Unity of the Blue Ridge, having held positions at the Center for Spiritual Living–Asheville and Jubilee! Community Church.

Projects released in 2018 include “Turned into Lemonade” with The Richard Shulman Group and “A New Awareness: Music of the Twelve Rays” a meditative CD designed to complement a book on the Twelve Rays by Michael G. Love.

2019 brought the release of jazz trio album Waltzing out of Town.

Shulman’s new album Life Seasons is vocal and instrumental music expressing the seasons and the depth of love possible from sharing life over many years.