The Story of Camelot Reawakened

Imagine the characters from Camelot talking amongst themselves in the inner planes after their generation had passed: “We almost made it! We almost created a heaven – on – earth. Let’s try again…”

In late September 1996, as I closed my eyes in preparation to compose a Musical Soul Portrait, I saw a vision of a sword descending from the heavens directly in front of me. I opened my eyes and described the vision to my client. She said, “I have one word for you: Camelot”.

She told me she had recently been to the British Isles to take part in a reactivation of the energies of Camelot, and gave me permission to use our time together to follow the vision that had come, and find it’s expression in music.

At that time I was working on music for “Keeper of the Holy Grail” (conceived by and in collaboration with healer Samuel Welsh) with the intent that listeners would be assisted by the music to experience the Divine within. It became clear to me that “Keeper of the Holy Grail” was part of a larger soul group project which would eventually bring a musical, an energetic, and finally a physical manifestation of the Dream of Camelot fulfilled, into community and society. This was not to be a regurgitation of the drama and historical failure we are familiar with, but a manifestation of a Dream of the Heart – a dream of Heaven on Earth, that flowered for a time in Camelot, and has continued to grow in strength on the inner planes and in the hearts and minds of many, awaiting it’s manifestation in harmony, balance, and joy.

This musical project was to be called Camelot Reawakened: A Vision Fulfilled, expressed in concert, as a recording on CD, and as a DVD and VHS concert/documentary video.

The Musical Soul Portrait performed that evening carried a power and beauty which expressed a dream of Heaven on Earth fulfilled. I knew I had been given a gift and a beginning, and I chose to follow the dream to it’s completion. 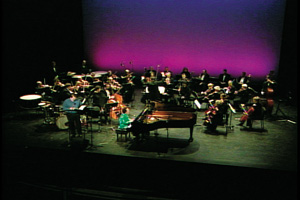 I began to see synchronicities within my music and my life in which people and opportunities presented themselves to support the unfolding of a vision of the “Dream of Camelot” fulfilled. These synchronicities indicated a metaphor between a society envisioned, and a musical work which could express the qualities of that society.

Over the next three years, many of the The Musical Soul Portraits I played for people contained themes that were related to the original Camelot piece. I understood that each of these Musical Soul Portrait clients was carrying a piece of the jigsaw puzzle of a harmonious society on the soul level, and when that puzzle piece was expressed in their music, a double gift was given. Their Camelot melody served to awaken the memory of their soul’s vision, and it also served to further the musical work of creating a piece that could reawaken the vision for others.

The discovery of the musical puzzle pieces for the Camelot project has also involved other projects. From September 1996 through January 2002, almost every creative recording I did contained or developed one of the themes of this living musical creation, thus linking much of my creative work together into an even larger whole.

The first such expression was “First Rites”, a collaboration with Healing Touch Practitioners to create music for healing. “First Rites” musically expressed a process of letting go and healing which I believe is necessary for individuals in the creation of a compassionate and harmonious society. At first, I had serious reservations about releasing “First Rites” to the public, thinking that I had ‘stolen from myself’. Eventually I came to the realization that the Divine had moved through me and my collaborators in this healing work, that it had been a healing force among us, and that the music could support individuals in their healing and in the reawakening of their own heart’s dreams. The “First Rites” recording supplied themes for the fourth movement of Camelot Reawakened.

“Keeper of the Holy Grail” supplied themes for the second movement, and “Music to Walk the Labyrinth” has a section related to the seventh movement. 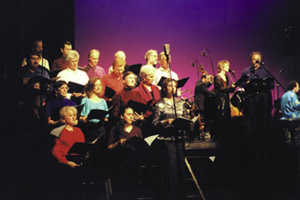 Choir and Soloists Sing “Remember the Love that We Are” at concert.

As this process continued, I became aware of more and more related musical elements for the project. I had no idea of how the various themes would all fit together, so I simply cataloged the melodies and spent time with them. Little by little I found parts that felt good together and a form began to take shape.

With the form came arrangements for symphony orchestra, piano, choir and soloists. Working an hour or two most days, in my ‘spare time’, the piece gradually came together.

Working towards fulfilling a vision for all has given me new opportunities to create my own dream come true. My passion for composing symphonic music has been growing in me for as long as I can remember. In college, I remember hearing a twenty piece string orchestra play back an exercise I had written. It felt like I was listening to God!

Over the years, I have continued to compose, but only rarely actually wrote for orchestra. Although the vision was there, the practical aspects seemed so immense! My fearful side would say, “How am I going to pay for so many musicians?” “What conductor will take a chance on my music?” and on and on. This was compounded as I wrote the orchestral arrangements for the Camelot project. Doubts such as “Am I making this all up?” cropped up again and again. It took considerable discipline to sit almost every day for several years working on something without a guarantee of its fulfillment.

Nevertheless, the sheer joy of composing this music, and the idea that this was part of a larger project that could help bring heaven on earth kept me at it.

The Universe supported the continuation of this project through exposing me to work that others are doing in reawakening the dream of Camelot, and by introducing me to those who could help organize, conduct, perform, and record a large scale symphonic production. 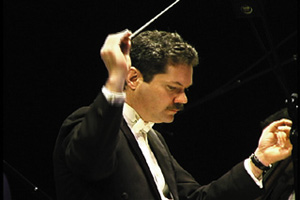 In the fall of 2000, I gathered my courage and approached Robert Hart Baker, the conductor of the Asheville Symphony Orchestra, with a mostly finished score of the music. We scheduled a concert on January 12th 2002 that was entitled “Visions of Hope and Healing” at the Diana Wortham Theatre in Asheville, NC, with a thirty-five piece orchestra. This concert featured the world premier of “Camelot Reawakened; A Vision Fulfilled.” 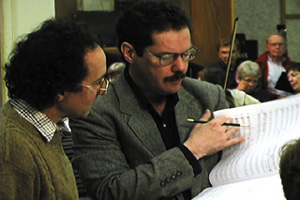 Richard and Robert at Rehearsal

Composer, keyboardist, and recording artist Richard Shulman has, since 1984, dedicated his music to the expression of love and the awakening of inner joy. Richard uses his extensive background in Classical, Jazz and New Age styles to create music to assist groups and individuals in embodying their own spiritual essence. Working with the power of music as a medium of positive transformation, he has created hundreds of Musical Soul Portraits for individuals, couples and groups, and has composed, produced and/or performed on over thirty recordings. Camelot Reawakened: A Vision Fulfilled. is available online and in stores. Richard can be reached at 828-658-9604 and info@richheartmusic.com.

“A Dream of Camelot” New Musical

With the completion of the Camelot Reawakened CD in 2002 and the DVD video in 2005, I thought that my Camelot project was over. However in 2006 the program director of a community center in Asheville suggested I write a musical based on the Camelot Reawakened project. “Camelot?” I said, “Don’t you know it’s been done?” A week later, he made the same suggestion so when I got home that night I sat down and the first two songs and the beginning scene poured out of me with tears and recognition.

As the new “A Dream of Camelot” project developed a realization dawned that many people need to change deeply rooted patterns which are also expressed in the Archetype of Camelot in order to live their dream. The perfect vehicle to show the transformation of consciousness necessary is musical theatre. Each song in “A Dream of Camelot” is an expression of consciousness in a process of maturing awareness. I brought human problems to the Inspiration, and Spirit provided answers through the songs.

“A Dream of Camelot” has taken six years of writing and development to become the transformational catalyst it now is for casts and audiences alike.

2009 brought the first reading of the musical at the UR Light Center in Black Mountain, NC. The first full production, directed by Jerry Crouch, was presented at the Asheville NC Masonic Temple, March 11, 12, & 13, 2011 and the musical returned to the Masonic Temple March 29, 30, 31, and April 1, 2012, directed by Rock Eblen.

More info about the musical “A Dream of Camelot” is available Here.